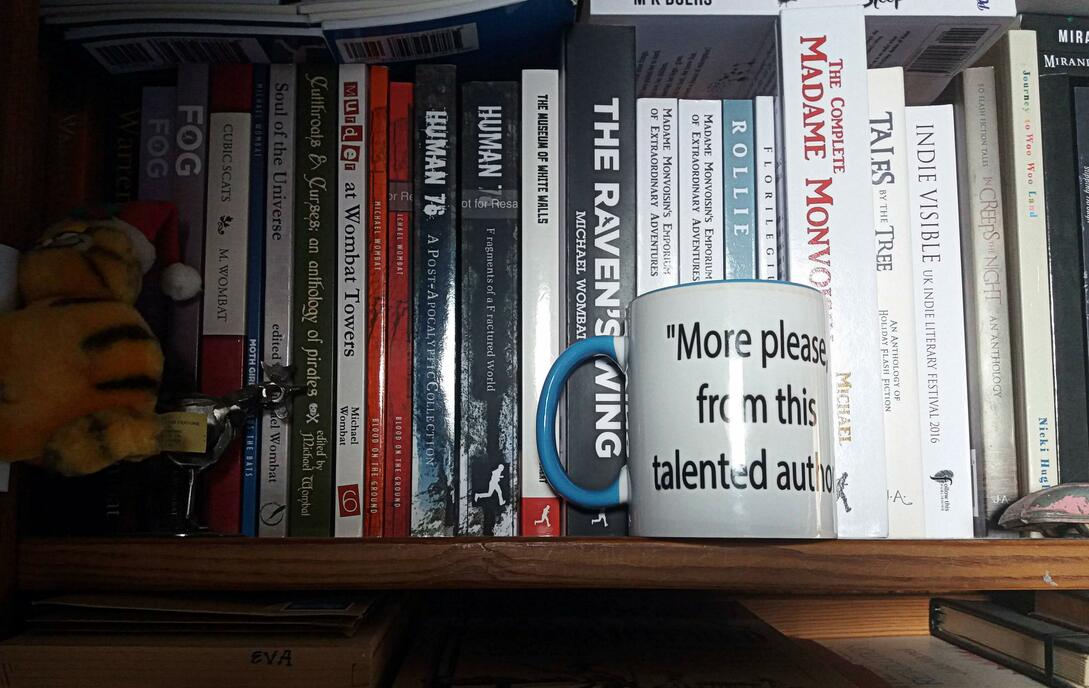 Best do an #introduction toot: I'm in the green hills of rural Lancashire, in the UK, and I write novels, short stories and terrible poetry. I once had a No. 1 best-seller in Germany #amwriting. Will post occasional photographs #photography
I like #football, proper #coffee, #history, #lexicography, #cheese and #Pink.

⭐ WOMBIE'S FREEBIES ⭐
A weekend of FREE KINDLE BOOKS.
#WombiesFreebies
5/5: BLOOD ON THE GROUND - "a stunning title story opens this amalgam of short and long tales"
https://mybook.to/BloodOnTheGround

⭐ WOMBIE'S FREEBIES ⭐
A weekend of FREE KINDLE BOOKS.
#WombiesFreebies
4/5: CROW - "if you like things piratey and a bit tongue in cheek, this is for you"
https://mybook.to/PirateCrow

⭐ WOMBIE'S FREEBIES ⭐
A weekend of FREE KINDLE BOOKS.
#WombiesFreebies
3/5: TOOTH AND CLAW - "an engrossing twist on the usual portrayal of dragons"
mybook.to/TandC

"Just Say When", a short timey-wimey story for you to read with your morning coffee.
https://cubicscats.wordpress.com/2022/07/22/just-say-when-a-short-timey-wimey-story/

⭐ FREE STUFF ⭐
📚 COS I LOVE YOU 📚
Over this weekend, young warriors, I'm making FIVE of my early books FREE for Kindle. Watch the hashtag #WombiesFreebies for announcements (and mute it if you get diddled off with seeing them).
First announcement coming up in five minutes.

Where's the off switch for brain-worms?

Fred Astaire with his Siamese cat, 'Carlyle,' on his shoulder, 1962.

Idly wondering whether I should have CW'd that story with 'Ants'.

As I read the last word, a gust of wind scattered the shreds of paper, pulling their meaning apart like a lost love. I sighed, stood, and walked away. Derek, my anteater, followed at my heels.

(I hope that threaded OK)

“My own Athenais. I understand why you left. In a world where every person is assigned an animal familiar – a soul in creature form, to carry their dreams and guilts – when two people fall in love it is important that their familiars can co-exist. I have asked my ants to bring you this message to spare us both the pain of parting words. Simply know this: I love you, and I will love you until my final breath. Hold that truth ever in your heart and think of me sometimes. All my love, Cullen.”

When the leading ant reached me, it put down its burden, and turned to begin the long meander back along the wall. I picked up the fragment of paper it had left, upon which was scrawled a word: ‘felt’. The second ant gave me ‘my’; the third ‘pain’.
I moved Derek aside with my boot, swept away the leaves he had been snuffling, and on the dry earth I began to construct the jigsaw of ant-borne words. It took some time, but when I had finished, this is what I had:

A third tiny boat appeared at the far end. The second had reached the tree.
No, they were not boats. The leader was eventually close enough for me to make out that it was an ant, carrying a scrap of white paper. I knew about leafcutter ants, of course, who didn’t? These were not carrying leaves, however.
More white scraps appeared, moving along the top of the winding wall like a confetti parade.

Good morning, everyone. Here's a little story I wrote recently, told over two or three toots. It's called 'LEAFCUTTER'

At the far end of the snakesweep wall, a small white speck trembled. It was moving towards me, following the curves of the bricks, steadily and slowly. When it reached the tree, another smithereen of white appeared at the far end, a few wall-curves behind it.
The first gradually came closer. It looked like a tiny boat with a sail, tacking against the wind on a brick sea.

Looking at toots from a month ago I see I was even then banging on about anxiety. I think I've been wracked by it since January, about one thing or another. Sleeping is hard, and waking up is always "oh god another day of worrying".
Still, I'm sure one day all the things will be behind me. I hope.

Hi, I'm back. I've had so many anxieties and worries lately that I kind of pulled into myself and hunkered down just at the bird place. Which was remiss of me - you're good people here.

Fancy a coffee and a ten-minute read? Of course you do, give yourself a break. Here's Robin Hood, but not the way you're used to seeing him.

twanta There is nothing here!