Just a reminder folks i have moved to ragamuffinjim@mastodon.social Please follow me there

I think my brain has turned to mush. I am taking a wee break from the webdev bootcamp and watching some #Babylon5

Up to the jQuery portion of the class in my review. I think that I will go out and check on the chickens right quick and get some blood pumping.

When I get back to the point where I was in the class before things got goofy in my life I intend to create a profile page and maybe hunt up some gig work. I didn't have far to go in the class before life hit. When I finish the course I intend to find a job... then again I did sign up for classes on React and Python too. Hopefully, HTML/CSS/JS will be enough to get my foot in the door and then I can go on to React and Python later

I have been reviewing old class videos on Udemy for a little over six hours now. My brain is a little mushy and I am not sure if "reviewing" is jogging memory or not.

Ok being a good boy today. Got up and did the usual morning routine and am hard at reviewing my Udemy class and will hopefully get to new stuff VERY soon

Watching #Babylon5 reruns when I had planned to be studying my Udemy classwork.


A year or two ago I watched a movie that claimed to be based on this book. It was a vapid affair which appeals to people half my age with more testosterone than sense.

Recently, someone told me that the book was good and nothing like the movie. With some dubious thoughts combined with zombies not really being my thing I decided to give the book a listen.

I have listened to about half of the book thus far and I got to say I am enjoying this one. It follows a oral/people's history approach in telling of the war against the zombies. In the telling of the tale themes such as the ineptitude of government, the atrocity of war, and suvivalism are explored.

While "zombies" may not be my cup of tea I  rather enjoying this book and am saving the #audiobook to listen to it again in the future. Yes, unless the author mucks up the second half, this book will be worth a re-read or two.
0
Jul 01, 2018, 01:16

Did you hear about the blind prostitute?

This is kinda cool http://www.mountvernon.org/site/virtual-tour/

James D Morgan   @jdm@elsmussols.org
Granted this is a very rough draft, as in so rough we can't even call it in alpha yet, but I am kind of having fun flexing the writing muscle again.
Here is the latest version of my #bad scifi  story. Yes, I know it is bad. Read the story and find out why.
0
Jun 23, 2018, 21:18

Today I have been married 28 years

I intentionally set out to write a #bad_scifi story. It is a work in progress and can be found at https://elsmussols.org/cloud/jdm/What%20is%20this_.pdf

James D Morgan   @jdm@elsmussols.org
Here is the first half hour in my attempt to write bad #sci-fi #amwriting

----
Ok so I just watched an hour of idiocy disguised as a TV show. This show had some big named scifi stars and cost over $100,000 to produce. What is worse yet is that it was picked up by amazon and it now has an international audience. It bad writing, bad acting, and bad production is all it takes to make money in the scifi industry then just maybe I am your guy.


So to that end, I am just going to start writing here and see where it goes. Whatever I write here surely can’t be any worse than what I just spent an hour of my precious life watching.


For a few days now a couple of thoughts have been running through my mind. 1- that most of the scifi stories out there deal with the upper echelons of whatever society and 2- they always have something to do with either police or military. I am not sure what to change but I have an idea of a merchant mariner and the proletarians he encounters. As one of the few actual proletarians that I know surely I can come up with something on that little bit.


Oh and forgive my typing this out on a form that I have set up. It was what was on the screen when I sat down to start typing.


By the by I started this at about 2:00 PM and probably won’t get very far as I am sneaking time from my boss.


So we have this Mercury class freighter. This is an ugly bulk of a shit. It is neither sleek nor sexy. Essentially it looks like a giant brick and pretty much flies like one. Unlike most of the freighters in most other stories the owner of this brick is just a guy trying to get by and he really doesn’t have much in the way of upgrades to this monstrosity. It is pretty much OEM, along with some creative southern engineering. The thing barely runs but it does make a regular run along the Jovian shipping lanes. She is not much but she has been reliable to this point.


Her name is the Elizabeth.
Owner/Captain/Engineer/Chief Coffee Maker XXX named her the Elizabeth after Dr Elizabeth Weir of the old Earth TV serial called Stargate: Atlantis. On one of his few trips back to Earth when he was junior mariner about the WHATEVERTHEHELLITSNAMEWAS he found some data crystals that had the whole series on them. Not being very rich or interested in such things this was the only thing that he watched for entertainment when he had downtime during his long hauls. He fell in love with Dr Weir and, quite frankly, had this weird obsession over this TV character.


He probably couldn’t tell you the name of the actor that played the part but he dang sure knew all of her lines in the show.


He worked his way up from spaceman and all the way through the ranks of the merchant marine. His training was all on the job. He could never afford to go to any of the academies to get the education required to join the officers guilds but he had one corp that was willing to give him a chance at command and during his short command he was able to make enough money to buy the Elizabeth.


His money was not made in the salary the Corp gave him but in the side hustles he had going on. I assume you understand that this means not all of his deal were on the just side of corporate policy.
Anyway he got the Elizabeth and after a slow start ---no one wanted to hire a freighter with an unguilded officer--- he managed to get by and even get a little ahead, at times. Even though he was the owner of that tub he rarely made more than the longshoremen in the docks where he ported.


It really didn’t matter much to him. He was free. He had enough money to live on and enough to keep the ship that could take most anywhere in decent repair.


It was a cramped ship. It had a bajillion tons or whatever of cargo space. The design specs said that it was supposed to have a crew of 4. He had a crew of one human and a droid with a bad attitude.


He won the droid in a poker game in the port at Io. The droid was one of those astro droids with a cool sounding spacey name with X1 after it. The droid’s original function was to repair holes on the outside of the ship. That was its sole function when he won it.


Shortly after he won it he had its memory wiped and had a new operating system put it. The droid had some sort of adaptive learning artificial intelligence. Which is all just a lot of fancy talk to say the dang thing could learn. And learn it did. Annoyingly so.


The droid was useful around the ship. It really did take care of the work of three people and it learned all the quirks of the Elizabeth and the quirks of her owner who still needs a really cool space hero kind of name.


The problem is that the damned thing learned to read somewhere along the way. It was always chiming in with quotes from Shakespeare or some other ancient minutiae from the literary world. Unfortunately, the last thing it got its optics on was a copy of the Communist Manifesto.


Now captain whatshisface was a member of the oppressive bourgeoisie in the eyes of the droid.


The Captain would tabula rasa him again but it made a decent cup of coffee and his lasagne was legendary up and down the Jovian run.
0
James D Morgan boosted
Jun 18, 2018, 00:18


This is a small Catholic Chapel on the former
Fort Stanton in Lincoln County, New Mexico
0
Show more
James D Morgan has moved to @ragamuffinjim@mastodon.social: 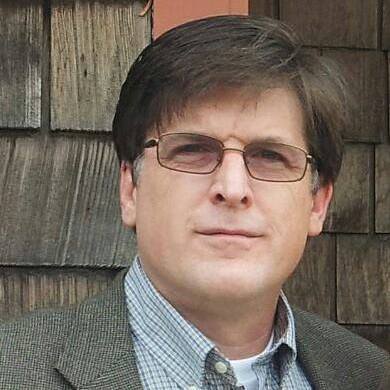